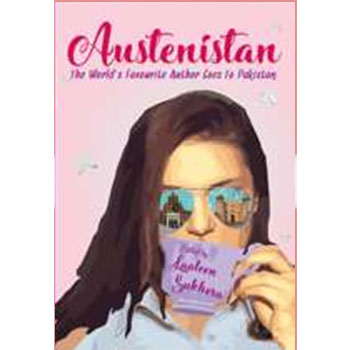 Heiress Kamila Mughal is humiliated when her brother’s best friend snubs her to marry a social climbing nobody from Islamabad. Roya discovers her fiancé has been cheating on her and ends up on a blind date on her wedding day. Beautiful young widow Begum Saira Qadir has mourned her husband, but is she finally ready to start following her own desires? Inspired by Jane Austen and set in contemporary Pakistan, Austenistan is a collection of seven stories; romantic, uplifting, witty, and heartbreaking by turn, which pay homage to the world’s favourite author in their own uniquely local way.

“I smiled all the way through Austenistan. I love this collection and the way that characters and themes from Jane Austen’s novels are transposed to modern day situations in Pakistan and around the world.  In these light, bright and sparkling stories we meet a latter-day Lady Susan, a mother with as many worries as Mrs Bennet, a heroine as mistaken as Emma

Woodhouse, and a woman as jealous as Caroline Bingley. And here, just as in Austen’s novels, we see heroines struggling to control their own destinies instead of being pushed onto the marriage market.”

AUSTENISTAN is a unique collection of contemporary short stories inspired by Jane Austen and set among Pakistani society. All of the contributors are women and all belong to the Jane Austen Society of Pakistan (JASP) and have ethnic, cultural and/or geographical ties to Pakistan. Each of the seven short stories offer an intriguing insight into the hearts and homes of metropolitan Pakistanis – often surprisingly similar to those of Austen’s Regency era two centuries earlier – as they undergo the trials and tribulations of blooming romances and failed relationships amid societal pressures and personal growth. From its array of well-intentioned heroines, privileged snobs and aspiring social climbers to its interfering aunties, attractive cads and annoying buffoons, AUSTENISTAN is a fictional romp that’s hard to put down.

As we celebrate the bicenntenial year of Jane Austen’s death in 1817 AUSTENISTAN underlines the universality and continued relevance of Austen—particularly within metropolitan Pakistan and the Pakistani diaspora. Inspired by characters and situations from Pride and Prejudice, Emma, Persuasion, Lady Susan and Sanditon, AUSTENISTAN’S contributors are a group of witty and perceptive women ranging in age from their twenties to their forties, who have written their stories from locations as diverse as Atlanta, Austin, Brussels, Cambridge, Colchester, Islamabad, Karachi, Lahore, London and New York.

These stories are snippets of human experience, ranging from light-hearted joy to heavy-hearted angst, depicted through nuanced, relatable characters in familiar situations. AUSTENISTAN provides an entertaining insight into various aspects of Pakistani society, from family values, social snobbery and superstitions to the all-encompassing drama of the wedding season:  what happens after ‘happily ever after’? What if she didn’t marry him after all? Or what if she did and then things changed? How can you have it all—romantic and professional fulfilment? With their vivid portrayals and whimsical details the stories explore universal themes, such as first love, dating after divorce, motherhood, marital issues, infidelity, and plenty of romance, laughter and happiness along with hardship and tragedy.

Austenistan shows how the Pakistan of today probably has more in common with Jane’s Regency society than the Western hemisphere does! Many of the social conventions that Jane Austen wrote about are still found in the Pakistan: the importance of making ‘a good match’, the influence of families over individuals and couples, elements of social decorum, the importance of maintaining a fashionable veneer at all costs, the social criteria for eligibility in marriage, saving oneself for marriage or at least appearing to, striving for a facade of propriety and, of course, inherent snobbery. There are ladies who appear privileged yet are often bound by misogynistic conventions that define them first by their fathers and then by their husbands.

“200 years after Jane Austen published her most famous works from her cottage in Chawton, in the South of England, her novels are enjoyed by a global audience from many different cultures and walks of life, each able to connect to her stories in their own way.  Having grown up in Chawton House, the grand country home of Jane’s brother Edward Austen Knight (my fourth great-grandfather), where my family had lived for generations, I am familiar with the surroundings, family structures and traditions of the landed gentry.  Almost every Austen reader I speak to can clearly relate to the essence of her characters, skilfully painted in often just a few carefully chosen words of dialogue.  In some countries readers experience similar predicaments to the women in Jane’s novels, with limited rights, independence and earning opportunities.  Others can relate to the social norms and family expectations around the finding of a suitable husband!

Whatever the personal connection, Jane’s work brings people together in a mutual admiration and enjoyment of her work.  Academics, appreciators and fans regularly gather at one of the many Jane Austen societies, events and meetings around the world, or belong to one of hundreds of online communities dedicated to Jane.  The Jane Austen Society of Pakistan is one of the newest societies and I am excited to see Jane’s work celebrated in new territories.  Thanks to the power of skype, I have had the pleasure of getting to know Laleen Sukhera, the Founder of JASP, and gained a greater insight into Jane’s relevance to the Pakistani culture.

Austenistan is an anthology inspired by Austen’s writings, characterisations and settings, written by women who, in many ways, have far more in common with Jane’s world than modern western readers.  It provides fictionalised snapshots of Pakistani society amid humour, drama and romance, all written by women who have ethnic, cultural, or geographical ties to Pakistan.  Edited by Laaleen, Austenistan celebrates the legacy of Jane Austen, who, despite the cultural expecations of her time, completed six novels that still touch the lives of millions today.”

Be the first to review “AUSTENISTAN-An Anthology” Cancel reply