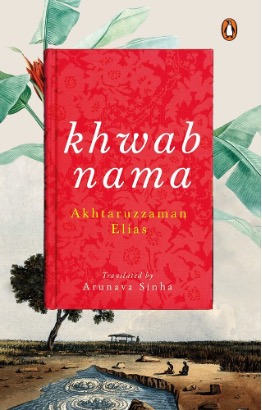 Bengal in the 1940s. Having overcome the famine and the revolt of the sharecroppers, Bengal’s peasants are uniting. Work is scarce and wages are low. There is barely any food to be had. The proposal for the formation of Pakistan, the elections of 1946, and communal riots are rewriting the contours of history furiously. Amidst all this, in an unnamed village, a familiar corporeal spirit plunges into knee-deep mud. This is Tamiz’s father, the man in possession of Khwabnama.

At first glance, Khwabnama is the tale of a harmless young farmhand who becomes a sharecropper and dreams of a future that has everything to do with the land that he cultivates and the soil that he tills. The fabric of his dreams, though, have as much to do with the history of the land as its future, and as much to do with memories as with hope. In this magnum opus, which documents the Tebhaga movement, wherein peasants demanded two-thirds of the harvest they produced on the land owned by zamindars, Akhtaruzzaman Elias has created an extraordinary tale of magical realism, blending memory with reality, legend with history and the struggle of marginalized people with the stories of their ancestors.

About the Author
Akhtaruzzaman Elias (1943–97) was a Bangladeshi novelist and short-story writer who, despite writing only two novels, is regarded by most critics as being part of the pantheon of great Bengali authors. Chilekothar Sepai (1987) detailed the psychological journey of a man during the turbulent period just prior to Bangladeshi independence in 1971, and offered an unrivalled depiction of life in Puran Dhaka, the old town.

Khwabnama (1996) depicts the sociopolitical scene in rural pre-partition Bangladesh. His many awards include the Bangla Academy Award for Literature (1983), the Kazi Mahbubullah Gold Medal (1996) and the Ekushey Padak (posthumously, 1999).

Arunava Sinha translates classic, modern and contemporary Bengali fiction, non-fiction and poetry from India and Bangladesh into English. Sixty of his translations have been published so far in India, eight in the UK (by Tilted Axis, John Murray, Hesperus, Seagull Books), and five in the USA (by Archipelago Press, Amazon Crossing, Seagull Books). Eleven of his translations have won, or been longlisted/shortlisted for literary translation prizes in India, the UK and the US. He is an associate professor of practice in the Creative Writing department at Ashoka University, India, and the Books Editor of the online politics and culture magazine Scroll.in.
Website: https://arunavasinha.in/

Be the first to review “Khwabnama by Akhtaruzzaman Elias, translated by Arunava Sinha” Cancel reply