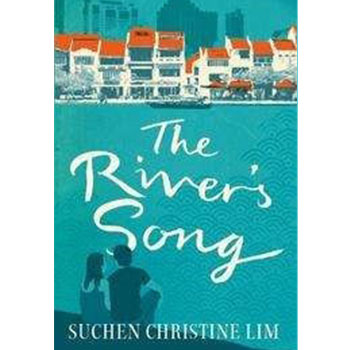 Ping, the daughter of Chinatown’s Pipa Queen, loves Weng, the voice of the people, but family circumstances drive them apart. Ping is forced to leave suddenly for the USA, where she creates a new life for herself. Many years later, Ping returns to find a country transformed by prosperity. Gone are the boatmen and hawkers who once lived along the river. In their place, rise luminous glass and steel towers proclaiming the power of the city state. Can Ping face her former lover and reveal the secret that has separated them for over 30 years? A beautifully written exploration of identity, love and loss, set against the dramatic upheaval unleashed by the rise of Singapore.

‘Singapore in the 1960s and 1970s isn’t yet a glittering metropolis—instead, it’s a warren of squatters’ shacks and crowded alleys, where the young Ping struggles to survive. Her mother, Yoke Lan, a beautiful nightclub singer/courtesan who plays a Chinese instrument called the pipa, left her for Hong Kong to seek her fortune. Ping sleeps in a cage in a rooming house, working in the landlord’s cafe and local markets to earn money for school books. Her boon companion is Weng, the son of a poor family, who dreams of being a flautist; his father, a river worker, is also a pipa virtuoso who takes Ping on as a student. They lead a threadbare but rich existence in the multiracial bustle of Singapore’s Chinatown and along the colorful, decrepit banks of the city’s river. But then Yoke Lan returns with a rich husband, and Ping moves to their grand house, posing as a distant relative to hide her mother’s disreputable past. Ping’s new life is wonderfully advantaged but loveless and tense; meanwhile, her deepening involvement with Weng becomes complicated by their starkly diverging fortunes. Her stepfather’s business moves to evict Weng’s neighborhood from a riverfront where land values are skyrocketing along with Singapore’s economy. Fate carries Ping to America, and after decades, she returns to take stock of her fraught relationships with Yoke Lan and Weng. Singaporean novelist Lim paints an evocative, atmospheric portrait of old Singapore and its vigorous, sometimes-brutal transition.’  Kirkus Review – Blue Star

The River’s Song (Aurora Metro, 2013) has been awarded a coveted ‘Blue Star’ by the Kirkus Review – an honour given to less than 3% of books reviewed by Kirkus.

Suchen Christine Lim is a prolific documenter of the inner lives of unsung Singaporeans, from street vendors and migrants living in poverty to women struggling for independence. ‘Fistful of Colours’ was her third published novel and the winner of the inaugural Singapore Literature Prize in 1992. Suchen is also the author of numerous short stories and children’s books as well as textbooks and a play.

Her short stories have been widely anthologised and her novels translated into other languages. Awarded a Fulbright grant, she was an International Writing Fellow at the Nanyang Technological University of Singapore. She has also held writing residencies in the United Kingdom, Australia, South Korea and the Philippines. In 2012 Suchen received the S.E.A. Write Award in recognition of her body of work

Be the first to review “THE RIVER’S SONG” Cancel reply